Artificial intelligence as the name coined refers to intelligence that is made out artificially to mimic the behavior of humans and to do intelligent work. In this era of the twenty-first century, AI technology is rapidly transforming our day-to-day life. Artificial intelligence chatbots, recommendation engines, and intelligent assistance are never more of a strange factor for humans. We live in a world that is bounded by the applications of AI. From the development of the first humanoid Robot Sophia to Siri and Alexa, AI is expanding its world of applications.

AI can execute the work much better than humans. The work which is repetitive, detailed, etc can be much better with AI machines. But this doesn’t mean artificial intelligence can replace humans, it is intended to build as a factor that can enhance the capabilities and decision-making power of humans.

Al intelligence is one of the major areas of computer science that is studied for decades and continues its journey for better innovations and developments. AI is not at all a new term, it is a word that is older than we imagine.

The very beginning can be marked by the myths of the electronic man referred to in Egyptian and Greek stories. The concept of making machines able to possess intelligence was first described by Alan Turing in 1950.

The Turing test which is termed in his book ‘Computers and Intelligence’ marked the initial thought of scientists, regarding whether computers are capable of human intelligence.

After six years, John McCarthy described AI as “the science and engineering of making intelligent machines”. The initial stage of AI is about the series of If, then statements, but Artificial general intelligence advanced over decades and is now able to execute complex algorithms to perform more human similar tasks.

Different types of artificial intelligence can emulate and replicate human behavior. In a sense, we can divide it into four distinct categories based on functionalities. 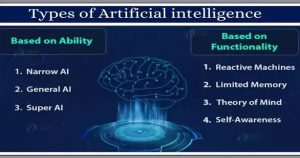 The most foundational level of Artificial intelligence is Reactive AI. The working of Reactive AI is so basic as it just provides a predictable output that is completely dependent on the input we provide. It behaves the same way to the same problem every time. The AI projects like the Spam Filters, Deep Blue, the IBM supercomputer, Netflix recommendations, etc can be marked as the example of Reactive AI.

Limited Memory AI is widely used today, as it can learn from the past and make predictions depending on historical data. The building of experimental knowledge and performing complex classification tasks are safe with Limited Memory AI. But as the name refers, the memory cant is saved for a long time. The capacity of the autonomous car to observe speed and direction is an application of Limited Memory AI.

It works with problem-solving and decision-making capabilities like a human. Machines with Theory of Mind AI can understand the emotions of humans and adjust their behavior. The elements of artificial intelligence can be well witness in this type. The humanoid robot Sophia is an example of the Theory of Mind AI.

Self Aware AI is the most advanced version of artificial intelligence. These types of machines are aware of the internal state, emotions, and behavior. It means more likely to be a robot with the consciousness and intelligence exactly like humans. This is yet to come and be process.

IF YOU WANT TO KNOW MORE TECHNOLOGY CLICK HERE

The ability to handle complex problems efficiently made artificial intelligence more popular and familiar to society. The data analysis and its integration with many programming languages give rise to several applications of AI. AI and python are one of the most demanded patterns in many top companies. The applications of Artificial intelligence and data science are not limit to one or three. There is a vast number of technological innovations that work with the computational power of AI.

The administration is so easy with AI applications. It can maintain organized files, schedule meetings, and assist day to day administrative work. The diagnosis of tumors and MRI scan interpretation, robotic surgery, and health monitoring is possible with computer vision and convolutional neural networks.

Artificial Intelligence in Education transforms the entire education system into digitized learning. It gives more space for personalized learning. Universal access to educational tools and translation is the result of AI development.

Artificial intelligence chatbots make the learning process much easy. The future of AI will surely impact the education systems which exist now. The more digitized form of learning is completely dependent on the future of AI. Even before the development of AI intelligence, the world of robotics is so popular. The stories, films, and fiction brought out the interest of people in robotics. With the emergence and advancement of AI, AI-enable robots have been found in different sectors of industries. Artificial intelligence robots have also been develope with the advancement of robotics with AI. The massive amount of data collection and organization of such billions of user profiles is possible because of the mechanisms of AI. It can identify a lot of data patterns and be use for the latest trends and hashtags.

AI in E-commerce and entertainment

Have you ever wondered how Netflix recommends you your favorite shows or Flipkart recommends you the wished product even without a search? The recommendation is all about AI. AI helps to associate the best product with the historical data pattern. Many of them coin artificial intelligence and machine learning as emerging technologies, but this man-made thinking power is not a new subject to think about. The advancement in AI makes it more and more popular and its applications are helping humans in many forms as well. “Predicting the future is not Magic, Its Artificial Intelligence”

Grow Lights Have 6 Advantages In Your Garden